This lesson is based on the CascEff deliverable “A report on the role of the media in the information flows that emerge during crisis situations” (Reilly and Atanasova 2016[D3.4]). It reorganises the content of that document for individual users, instructors, educators, and educational institutions that wish to engage in a learning session about the news media during crisis situations with cascading effects. It helps learners to consider and understand main areas of change in communication dynamics and information flows during crises, in order to influence the behaviour of disaster-affected populations and improve disaster management in general. 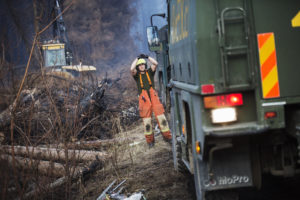 The general aim of this lesson is to help learners to understand the roles and dynamics of mediated communication related to disasters, and to reflect on how institutions and organisations can approach the news media for a successful management of crises. By the end of the course, students should be able to:

In order to achieve these aims, this lesson explores the role of traditional media in disasters in general, and its changes over time, and it links to issues of citizen engagement and the role of emotions during crises. The lesson also explores the role of traditional media during the different stages of a disaster, and within the wider informative flows that can shape communication at those times. Therefore, this part of the lesson also links to issues related to social media. It then explains the importance of context in evaluating media role, by focusing on three case studies and analysing their information flows and media role (Floods in England, Project X Haren, Pukkelpop). The conclusive part of the lesson brings together the issues considered in the form of a summative discussion of main areas of change in media and emergency management.